The Broadbalk wheat experiment, established in the autumn of 1843, has been cultivated since at least 1623, and probably much earlier (Avery & Bullock, 1969). Soil chemical properties have been measured at regular intervals since 1865.

Soil pH: The plough layer (0-23 m) is limed when necessary to maintain a minimum soil pH of 7.0  7.5. Broadbalk was first limed regularly from 1955-1967, with plots given the larger inputs of ammonium fertilizers receiving more lime than the controls. Liming stopped from 1968-1975, but began again in 1976-1992, with 3 or 4 sections being limed each year. From 2007 onward selected plots have been limed every 5-6 years based on soil pH measurements to maintain top-soil pH around 7.0-7.5. Selected plots were limed in autumn 2018.

Broadbalk soil has been sampled on many occasions over the years. However, because the method of sampling has changed and the experiment has been divided, first into two halves, then into five sections and finally into 10 sections, it is not always advisable to directly compare one sampling with another without careful thought. This table shows, where possible, how samples taken over time relate to each other. Selected plots and depths have been sampled on other occasions; most samples still exist in the Sample Archive.

In autumn 2004 it was apparent that parts of the field had been ploughed slightly deeper than 23cm as sub-soil clay was visible in random patches across the field. Thus in 2005 and 2006 all plots were resampled to create a new baseline, if necessary, for soil chemical properties. The sections were then sampled systematically from 2008 onwards.

Data before 1926 (when the experiment was divided into sections) are given for whole plots only, from the re-analysis in 2000/2004. More recent data are available for individual plots within each section.

1944 data: four holes were taken from each of the (then) five Old Sections; holes 1 & 2 were on current Section 0, holes 3 & 4 on current Section 1 etc, so the data can confidently be allocated to the modern sections. Data is presented as the mean of the two holes for the topsoil. Subsoil data is not available for each modern section, as the samples were bulked from four-sub-samples for each of the five old sections. Data for Old Section I is used for current sections 0 and 1, Old Section II for Sections 2 and 3, etc. (see soil sampling plan for more details). The soil was re-analysed in 2003-5 from selected plots from all Sections and depths. All data is from the re-analysis except %CaCO3 which was analysed in 1944. Soil pH and Exchangeable Na were not measured in the 1944 subsoil samples.

Samples between 1865 and 1914 were taken with an open-ended metal box, 9 inches (23cm) deep and usually 6 x 6 inches (15 x 15cm) across. There were between three and eight sample positions on each plot which were bulked together for each depth on each plot. In 1944 a spade was used to sample the 0-23cm layer, and the subsoil (23-46cm) was sampled with a semi-cylindrical auger.

In 1936 and from 1966 onwards samples were taken with a semi-cylindrical auger. 10-20 cores were taken from the different soil layers for each individual plot within each section and bulked together for each plot. Small diameter cores taken by semi-cylindrical augers cannot be used to determine soil weights, but provided enough are taken the sample better represents the proportions of SOC, N, P, K etc in the soil than a few large box samples. See soil physical properties for details of soil weights.

Samples were taken in the autumn, after the crop had been removed, but before ploughing, except for Section 3, 1996 which was sampled in March. 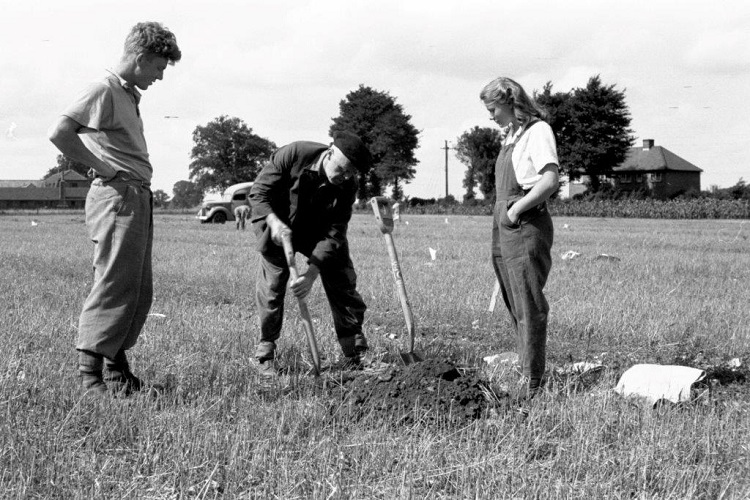 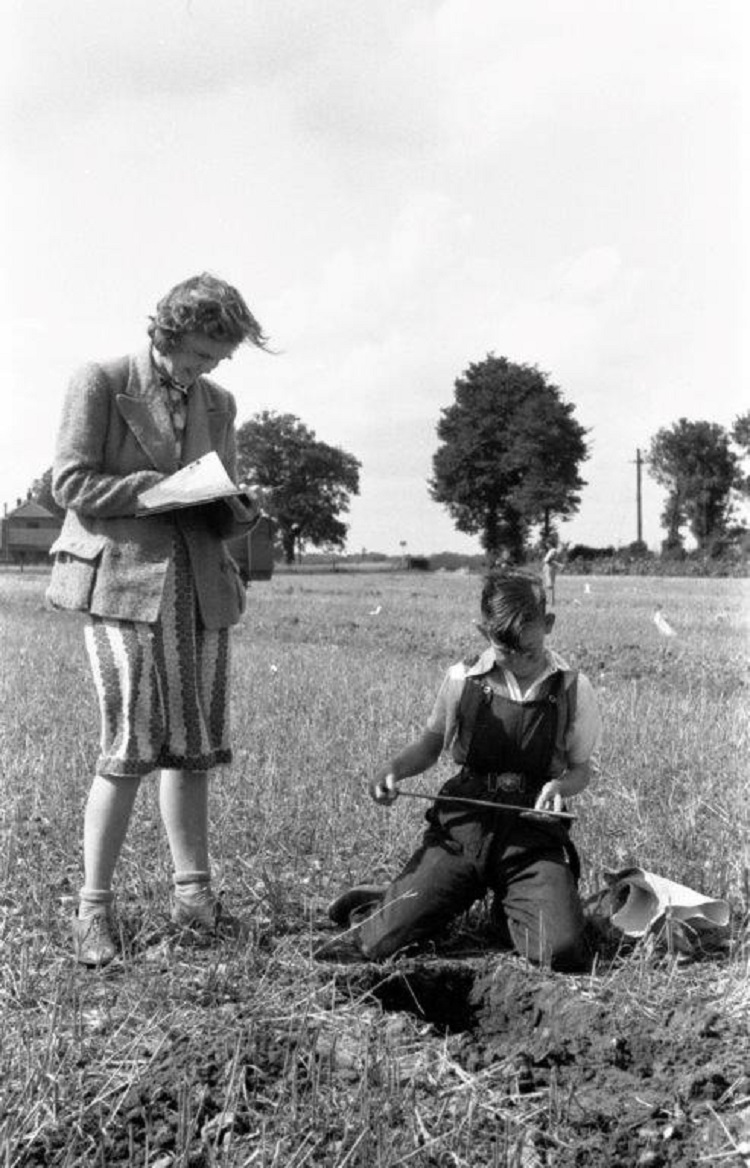 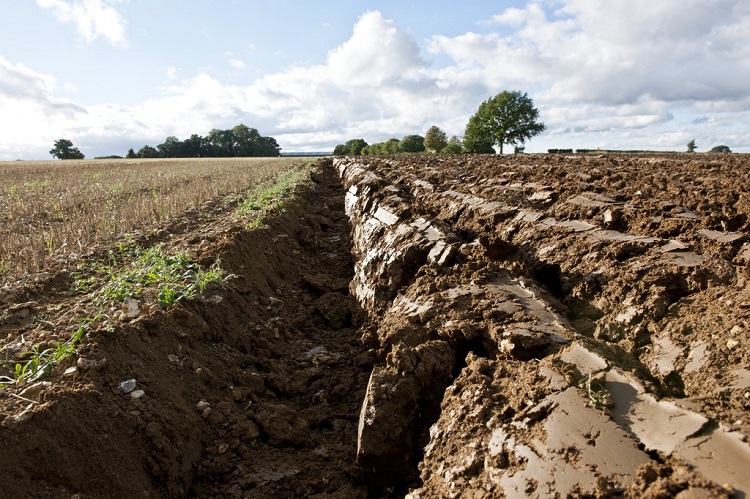 1881-1944: Selected samples re-analysed in 2001-4 by combustion analysis, based on the Dumas method, using a LECO combustion system. Measured on air-dried, finely ground soil (to pass a 355 micron or 44 mesh sieve).

1992 onwards: Combustion analysis, based on the Dumas method, using a LECO combustion system. Measured on air-dried, finely ground soil (to pass a 355 micron or 44 mesh sieve).

1881-1944: Selected samples re-analysed in 2001-4 by combustion analysis, based on the Dumas method, using a LECO combustion system to measure total carbon. SOC determined as total C minus CaCO3-C, measured by a calcimeter (see below). Measured on air-dried, finely ground soil (to pass a 355 micron or 44 mesh sieve).

1992 onwards: Combustion analysis, based on the Dumas method, using a LECO combustion system to measure total C. Measured on air-dried, finely ground soil (to pass a 355 micron or 44 mesh sieve). SOC determined by subtraction of CaCO3-C, measured by a calcimeter (see below).

All samples up to 2012 were analysed by a calcimeter. CO2 is liberated from CaCO3 in the soil sample by treating with hydrochloric acid (HCl) in a closed system. The amount of CaCO3 is calculated by comparing the pressure produced by the sample against the pressure produced by known weights of CaCO3, using a mercury filled manometer. %CaCO3-C or %IC is derived from %CaCO3 by dividing by 8.333. Since 2014 inorganic C has been measured by an automated Skalar Primacs inorganic carbon analyser.

Soils from selected treatments sampled in 1865-1944 were re-analysed in 2000-4. All samples were analysed by the Olsen method, in which soil is extracted with a solution of 0.5M NaHCO3, buffered at pH 8.5 (Olsen et al, 1954). The extract is then analysed by continuous segmented colorimetric flow analysis. Measured on air-dried soil, sieved < 2mm.

See Blake et al (2000, 2003) for a discussion of the P balance on Broadbalk and changes in soil P fractions over time (Key References, below).

Selected soils sampled in 1865-1944 were re-analysed in 2000-6, and those sampled in 1966 were re-analysed in 2019. All soils were extracted with 1M ammonium acetate (NH4CH3CO2) solution, after the method of Metson (1956). The data is expressed as mg kg-1 in dry matter, with 5mg of soil in 100ml of leachate. Since 1983, the extracts have been analysed by ICP-OES (Inductively Coupled Plasma - Optical Emission Spectrometer). Measured on air-dried soil, sieved < 2mm.

Blank (control) values: Analysis blanks were subtracted from exchangeable Na, and other cations if necessary (e.g. K in 1987).

Samples taken in 1966 were re-analysed in 2019. The exchangeable K values differ from those published by Johnson (1969b), when a slightly different technique was used for measuring exchangeable cations, which involved swirling the samples in successive amounts of ammonium acetate and decanting off the solution once settled. In 1966 the extracts were measured with a flame photometer. Bolton (1972) reports on exchangeable Ca and Mg in Broadbalk soils from 1856-1966 for some sections, from the western (top) end of the field, but the 1966 data has not been found. It is recommended that the re-analysed data from 2019 is used for the 1966 samples.

See Goulding et al (2000) for measurements of nitrate leaching from the Broadbalk wheat experiment from 1990-1999 (Key References below).

With thanks to Andy Macdonald, Paul Poulton and Steve Freeman for help with compiling the data and text.