Weather data for the public 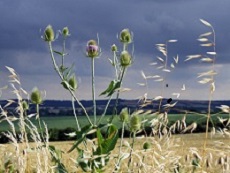 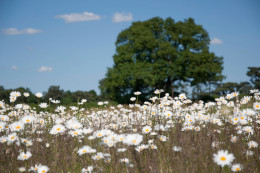 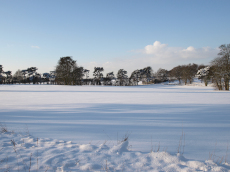 History of weather measurements at Rothamsted:

Sir John Lawes, the founder of Rothamsted, realized that to understand crop growth, it was important to have records of the weather. Weather records also help us to understand the spread of crop diseases and insect behaviour. Rainfall and wind direction have been measured at Rothamsted every day since 1853, temperature since 1878 and sunshine since 1890, making this one of the longest sets of meteorological (weather) data available in the UK. As new equipment was invented to measure different meteorological variables, scientists added them to the Rothamsted weather station. Now over 25 different weather measurements are made every day.

How the data is measured: 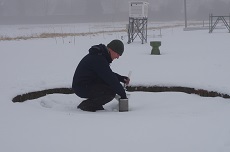 Recording precipitation at Rothamsted - whatever the weather!

Location of the weather station:

The weather data stored in our electronic database (e-RA) is recorded by the Rothamsted weather station in Harpenden, Herts. Its specific location is Latitude 51.82 North & Longitude 0.37 West. It is 128 metres above sea level. GB Grid Reference: TL121134. The site is fairly open and surrounded by sports fields and arable fields.

e-RA is an on-line database developed by Rothamsted scientists to provide safe and secure storage of the data from Rothamsted's long-term experiments and meteorological (weather) data. The data are freely available for use by scientists and universities. A subset of weather data have been made specifically available for schools.

Rainfall (RAIN): This is total rainfall over 24 hours, measured in mm. It includes rain, snow, mist and fog (together called precipitation). Originally the rain was collected in a copper funnel rain gauge, and the water measured manually in a graduated cylinder. Since 2004, rain is measured using an electronic tipping bucket rain gauge, calibrated to tip at 0.2mm. This means that since 2004, the minimum amount of rain that can be recorded is 0.2mm. These rain gauges are surrounded by a 1.5m radius turf wall, 30cm deep, to reduce wind eddies blowing the rain out of the gauges.

Sunshine (SUNHOURS): The total amount of time when the sun shines during each day. This is measured in hours, for example, 10.5 hours means 10 hours and 30 minutes. Hours of sunshine were originally measured by a Campbell-Stokes sunshine recorder. The sun's rays were focused onto a card (treated to prevent it from catching fire) and the brown scorch mark on the card was then measured. The longer the scorch mark, the longer the hours of sun. The cards were of varying lengths applicable to the time of year (winter, equinox, and summer). Since 2004 sunshine has been calculated using the Campbell-Stokes equation from solar radiation measured using a thermopile pyranometer.

Temperature (TMAX and TMIN): The maximum and minimum air temperatures during the day, measured in °C. TMIN should be less than or equal to TMAX. The daily temperature is the mean of TMAX and TMIN ((TMAX + TMIN)/2). Temperature used to be measured with a maximum and minimum mercury thermometer. Since 2004, electronic temperature probes have been used, which are linked to the automatic data logger. The thermometers are housed in a unit called a Stephenson Screen to ensure shade from sun - ventilation is provided by slits in the sides.

Wind (WDIR): Wind direction, measured at 09.00 GMT each morning. This is shown as an angle, going clockwise from the North. 360 = North, 90 = East, 180 = South, 270 = West. The reading is in degrees. 0 degrees means that there is no wind. Wind direction was originally measured by a wind vane linked to a Munro roll chart recorder. From 2004 an electronic wind vane linked to the automatic data logger has been used. See video of wind direction recorder (above) to show this in action.

Wind run (WINDRUN): The total amount of wind in a day, measured as a distance (km). Wind run is measured by a cup anemometer, which is blown around by the wind, and the distance it turns around is recorded, in km. This is on a pole 2m high. Since 2004, an electronic cup anemometer has been used, which is linked to the automatic data logger. See video of wind speed recorder (above) to show this in action.

RAW DATA FROM THE e-RA DATABASE:

We hope that the data here will be used by anyone with an interest in local weather. There is also lots of background information on how the data is measured, long-term weather and a username to access the data and do some research yourself on real data.

A simple set of daily Rothamsted weather data, from 1918 to the current date, was set up for the 2018 Festival of Ideas and is freely available to download. It contains daily rainfall, maximum and minimum temperatures, sun and wind data.

To extract your data, go to the 'Extract Data' button at the top of this page.

This will give you access to the dataset PUBLICDAYMET. To select a particular date or range of dates, click the right box next to 'day' then go to 'filter' and 'set' your dates.

Follow detailed intructions on this information sheet, 'How to extract birthday weather data from e-RA'.

The long-term weather records at Rothamsted have been invaluable in aiding understanding of the effects of climate on crop growth, yields and diseases. They have revealed changes in temperature and rainfall over 170 years. The annual mean air temperature has fluctuated considerably and rose sharply between 1987-2007. 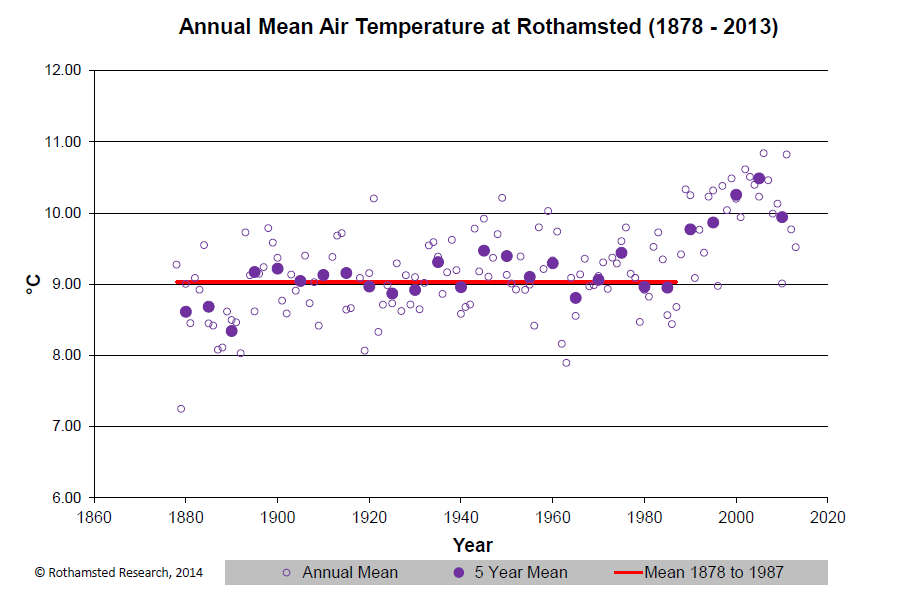 Click the chart above for a PDF version. Data are available to download as an Excel Spreedsheet: Annual mean Rothamsted temperature.

These data are freely available, no password is required, however users are requested to acknowledge Rothamsted Research as the data source. 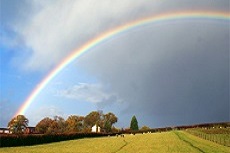 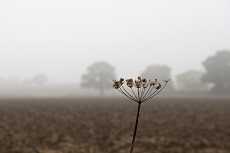