The following wheat root and stem diseases have been assessed on selected plots regularly since the introduction of rotations in 1968:

The take-all fungus infects winter wheat roots in the autumn causing black necrotic lesions on the roots. Early infections can lead to uneven growth in the spring and occasionally plant death. If severe infection occurs in June/early July above ground symptons often show as patches of premature ripening plants with reduced yields and grain quality. Comparisons of yields and of differences in amounts of take-all between continuous wheat on Broadbalk and wheat in other fields growing shorter sequences of cereals culminated in the development of the hypothesis of 'take-all decline'. This phenomenon is now widely recognised and has been shown to occur in all the susceptible cereals. 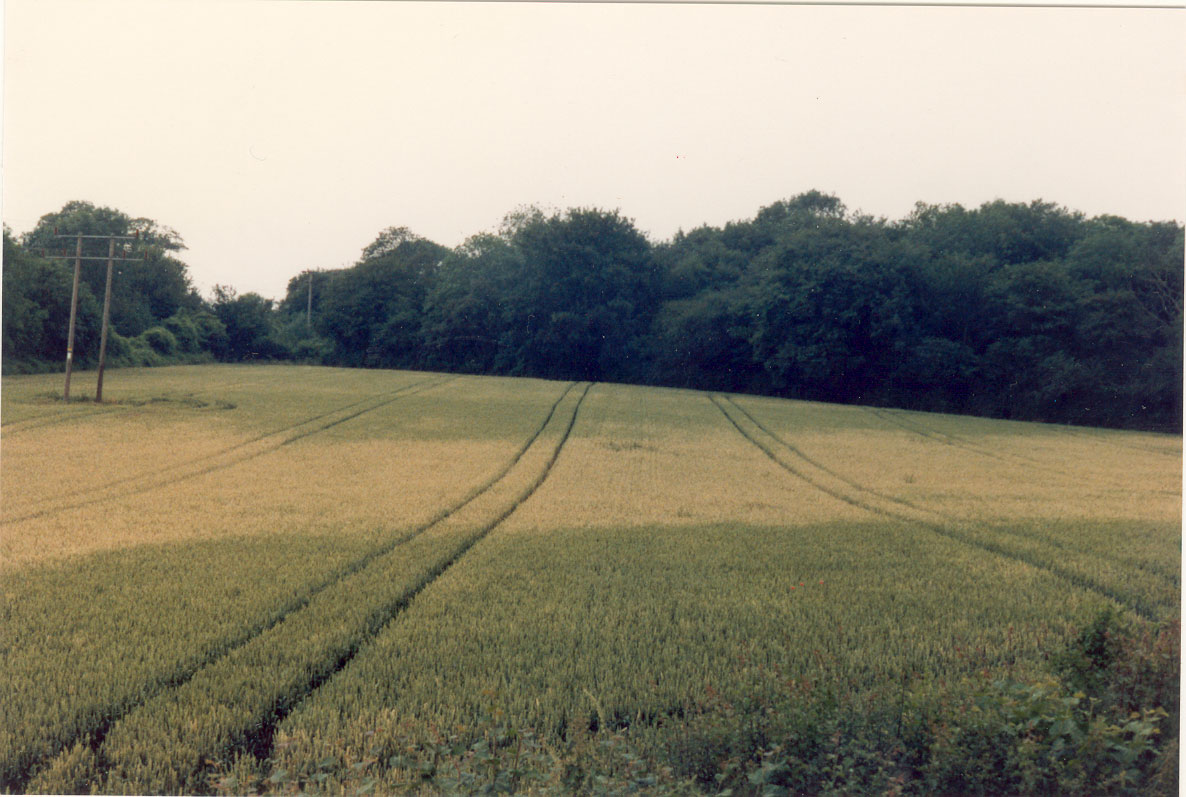 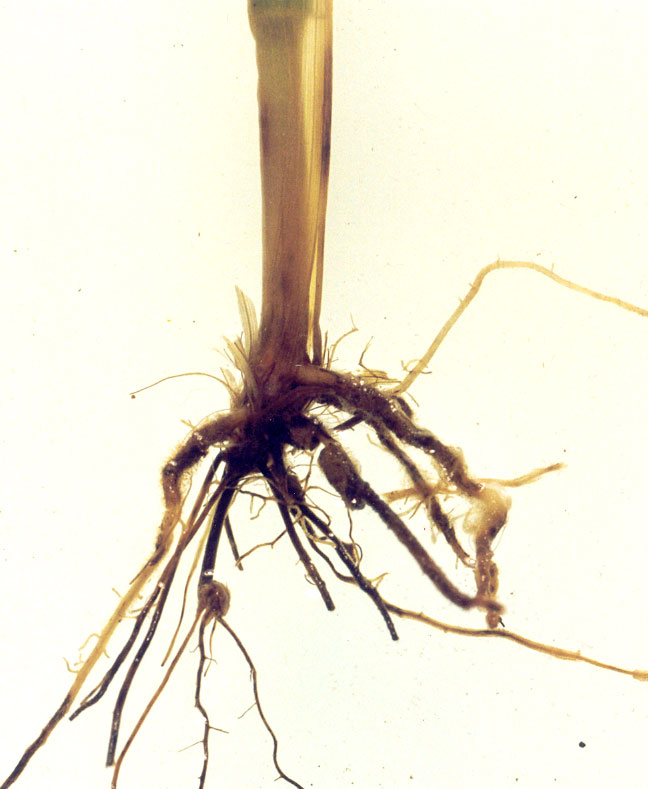 Eyespot was first identified in the UK in 1935 on Broadbalk. It is common on intensively cultivated cereals in heavy soils and is favoured by long wet and cold periods in winter and spring. The fungus can survive on infected stubble and in the soil for 2-4 years. Early symptoms are difficult to assess and can range from a brown smudge to a typical eye shaped lesion. Careful removal of the outer leaf sheath can reveal a small black dot, the penetrating stroma. It penetrates the leaf sheath eventually infecting the stem. Severe infection softens the stem, often showing as white heads and can lead to lodging of the crop as it matures. 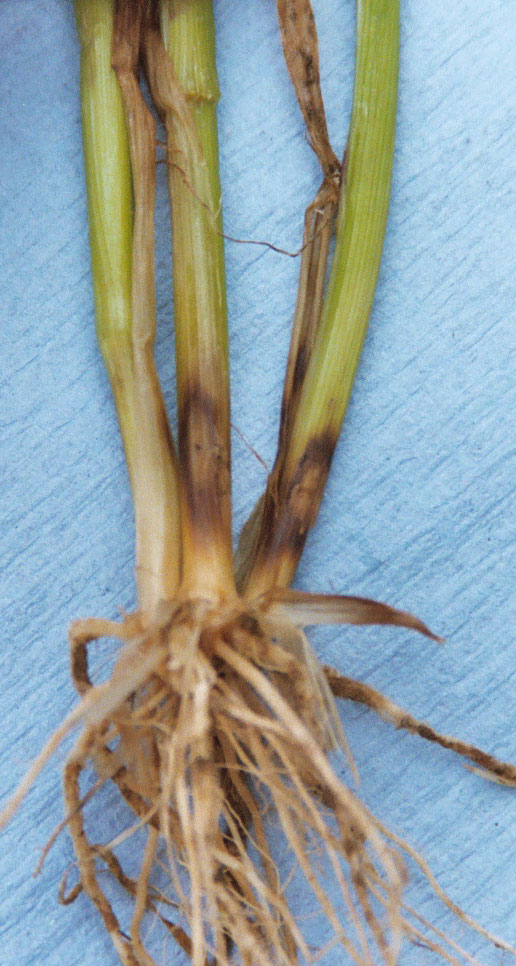 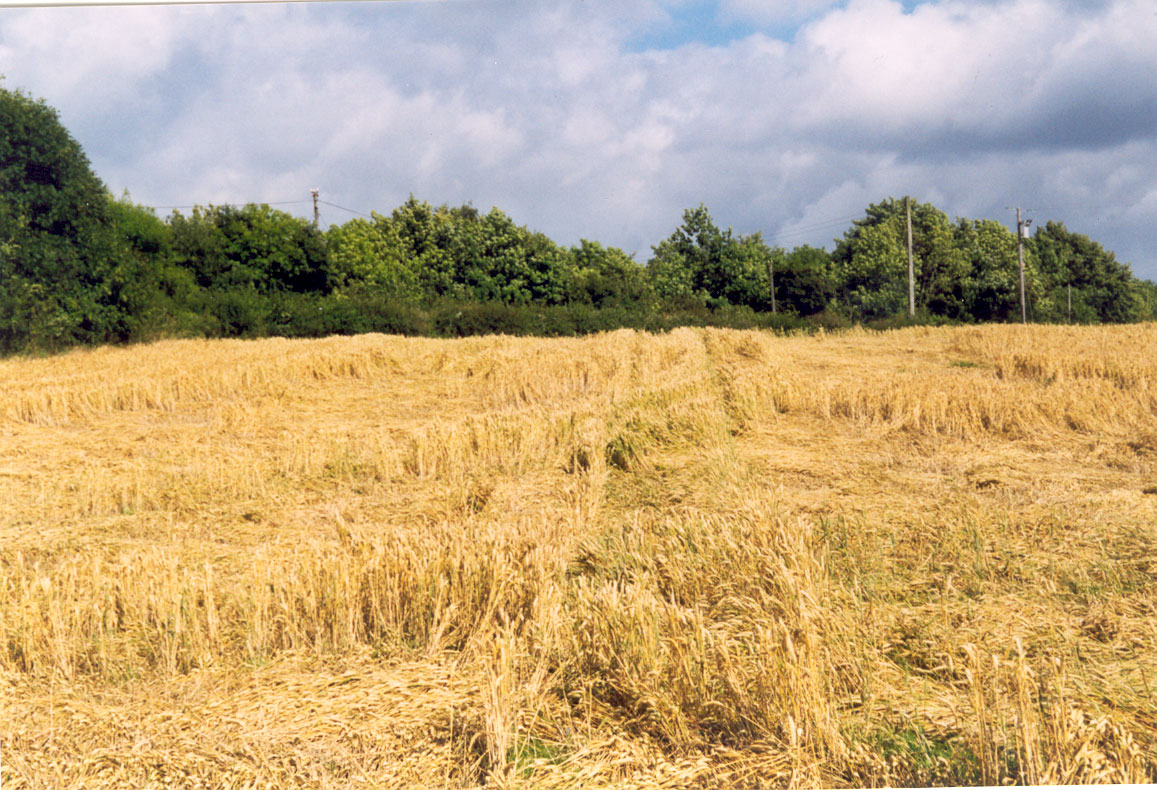 Lodging of wheat caused by eyespot 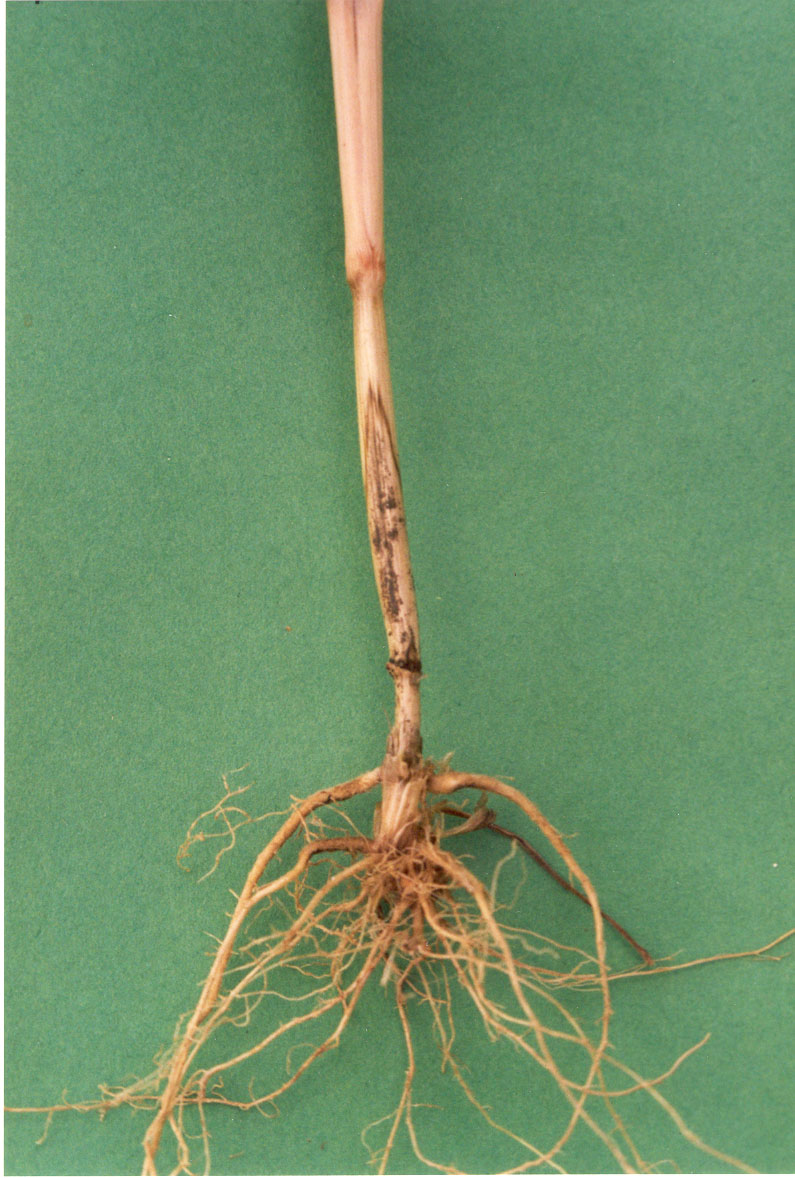 Sharp eyespot causes numerous stem and stem base lesions. The fungus overwinters primarily as mycellium on infected stubble but has a large host range which can also act as a source of inoculum. As a result, the fungus is not easily controlled by rotation. Early symptoms show as well defined lesions on the outer leaf sheaths and frequently have interveinal tissue shredding within the lesion. Infection can occur at any time during the growing season. Late infections often remain on the leaf sheaths but early infections can penetrate the straw often causing multiple lesions that can be observed as far up the stem as the 4th node. Severe infection can cause white heads and make the straw brittle. The disease is favoured by cold and dry conditions and is less prevalent in intensively cultivated cereals. 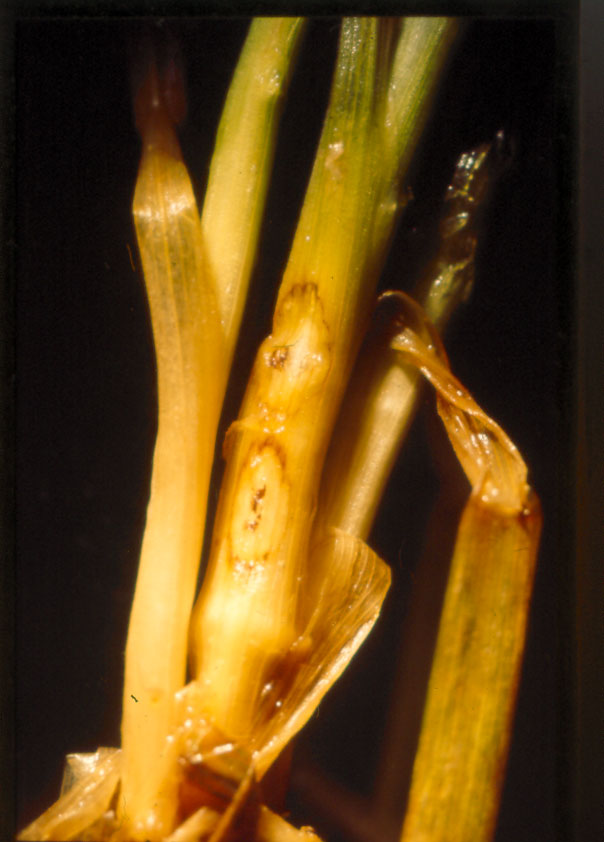 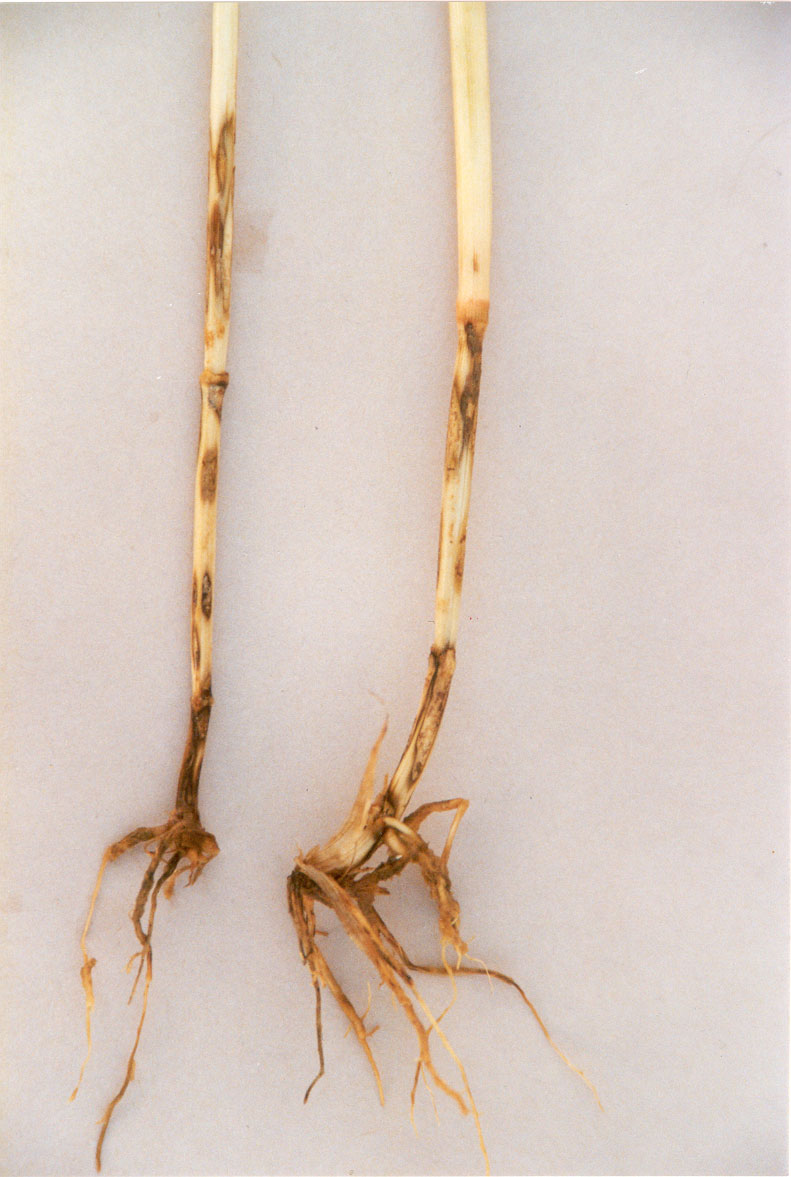 Brown foot rot is caused by Fusarium spp. and is both soil and seed-borne. Infection often begins at the base of the leaf sheath and spreads up the leaf. The fungus continues to spread eventually reaching the nodes and straw causing two distinct symptoms. An overall general browning, mainly attributed to Fusarium culmorum, and streaky brown lesions caused by Microdochium nivale. Severe Fusarium infection can result in whiteheads and occasionally lodging of the crop. 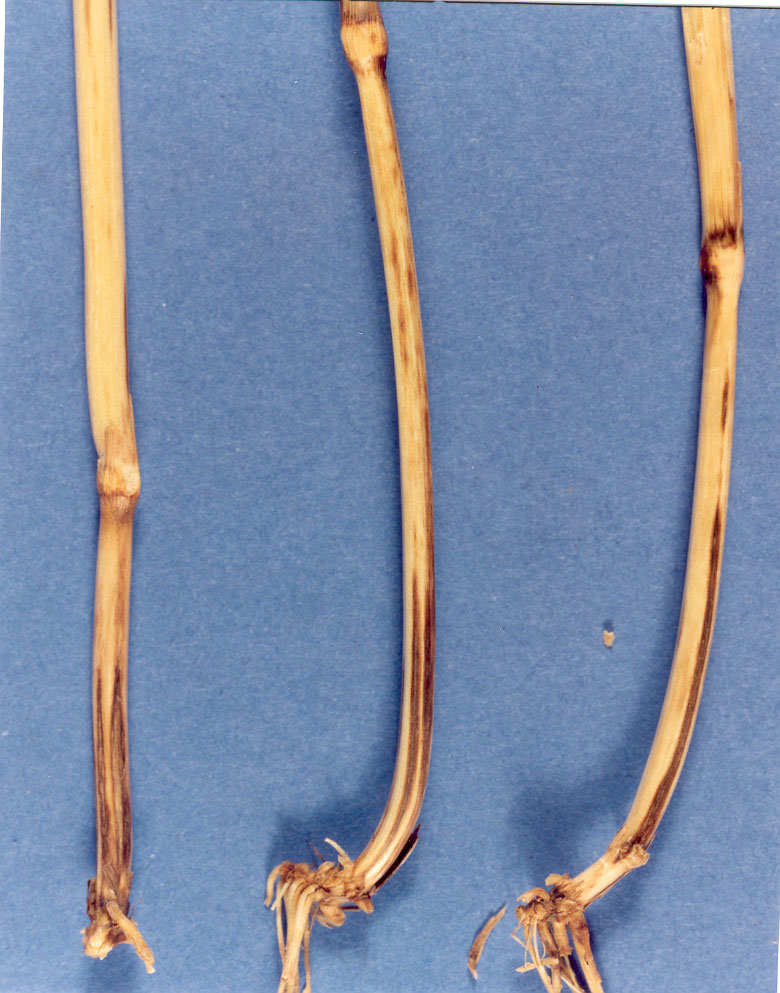 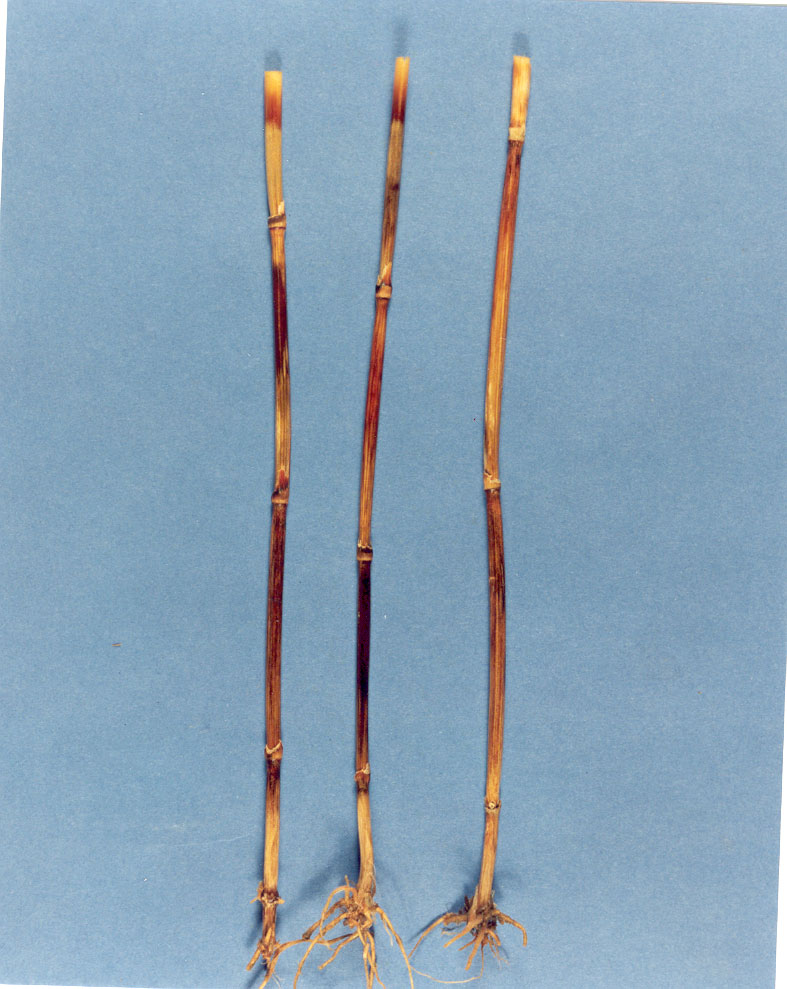 No disease assessments were done from 1982-1984. This was a transition period during which the rotation period changed from 3 to 5 years.

Brown foot rot is classified as slight or severe (Goulds & Polley, 1990). Plants with slight brown foot rot have either a general light browning occupying most of the circumference of the straw (typically caused by Fusarium culmorum) or fewer than 5 dark brown-black narrow streaks c.1mm wide (typically caused by F. nivale). Severe symptoms are defined as a general dark brown discoloration of the straw usually extending over more than one internode (F. culmorum) or more than 5 brown-black streaks greater than 1mm wide (F. nivale).

With thanks to Richard Gutteridge for providing the photographs and helping to compile the text.

For more information, refer to the Rothamsted Guide to the Classical Experiments 2018 page 17